skip to main | skip to sidebar

I still remember the excitement which was there when the expressway opened between Mumbai and Pune. We had rarely seen a road like that in India. And it cut down the distance by almost two hours from what it used to be.

It still is about a 2 hr drive and another 1.5 hrs to get in and out of the cities.

I have travelled the route over the years and have seen the highway grow. As have the food courts!

I did the route yesterday and I saw that the food courts have really grown in number and variety. There is something for everyone. I was telling my colleagues that I felt like I was seeing a baby grow. And it felt good!

Here were some of the pleasant discoveries on the way to Pune from Mumbai:

- The Mc Donalds at Panvel, which is actually before the highway while coming from Bombay – now opens at 6 AM and serves breakfast. I remember stopping there earlier at 9 and 10 AM in the morning and being turned back as they opened at 11 AM. This time we had some very nice sausage muffins (the bread was light and slightly crisp compared to the burgers), excellent pancakes with coffee and maple syrup, Georgia Coffee (very nice), Minute Maid orange Juice. A colleague had has brown potatoes which looked tasty. Most dishes cost Rs 50 (1 USD). I wished they served this at Bombay too. They had done up the toilets too and they looked nicer than before 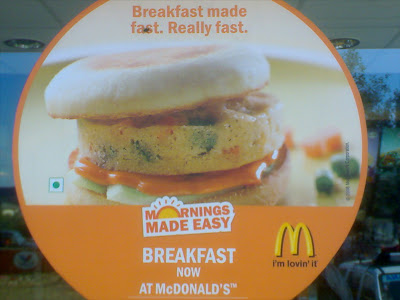 - The side of the lane facing Pune has a largish stop in the middle with a number of restaurants which sell local Maharashtrian fare (upma, bata vad, etc), South Indian Stuff, juices and sandwiches. This is one of the first courts but has grown with time. The average dish costs Rs 20 – 40 (50 – 60 cents) here
- Now there is a stop at the end of the highway towards Pune. This is the second stop after it ends and you have a Coffee Day there if you don’t like the local coffee in the earlier stops. Good to buck you before a meeting or before entering Pune.

My excitement would sound strange to people from the West or even from countries like Thailand. But these are big improvements in India.

I was travelling with a couple of colleagues yesterday who shared my love for food. We kept talking about food through the journey. Which was good as our meeting at Pune seemed a bit pointless.

Traveler’s Notes:
- These stops have ample parking
- Now there are signs directing them to you on the road so you are warned well in avance in case you want to turn in
- There is quite a variety of options, most places are reasonably clean and hardly any have dishes which cost more than Rs 50 (or 1 USD)
- Most of these places have washrooms which are ‘fairly’ clean

- There are gas stations/ petrol pumps at all these stops

- Most also have shops where you can buy local favourites such as chiki (nuts in hard boiled jaggery), chocolate fudge, jelly sweets, jams and juices which you can take as gifts

Posted by Kalyan Karmakar at 2:07 AM

McDonalds does serve Breakfast in Mumbai as well in Ville Parle

Thanks Nilakshi. Just found that And Vashi, VT and Phoenix. Why not Bandra :(

Came by from Nomad's and didn't want to leave without saying hello (lurking is so not cool with me :))

So, hello and good going, will check out your other blog now though something tells it will be full of fish and curry.....

Hey Parul...thanks so much for dropping by. I must confess that i love to get a comment. hope you like the food blog. Yes there is a lot of fish there but the irony is that I am not too fond of fish. I love buying it though as it helps me connect to my roots. And my wife is mad about fish

Thanks for sharing good information. Enjoy the divine taste with your loved one, order food online in pune Zaykedaar.com (600+ restaurants in Pune)

Vote for Faraway Diaries...even if I barely write here now

This work is licensed under a Creative Commons Attribution-Noncommercial-No Derivative Works 2.5 India License.